By Christopher Eby - November 25, 2017
This is one of a series of posts written by Jaime Garcia, a young missionary who we have partnered with for some work in Thailand.


On the rolling hills of Chiang Rai Province, Thailand, a quaint village was nestled deep in the throbbing heart of the mountains. For centuries, this remote settlement had been called Mae Suai by the locals, meaning ‘the beautiful matriarch.’ During the 1960’s and 70’s, turmoil in the Laos and Myanmar forced tens of thousands of minority peoples to flee their villages. They slogged through precarious tangles of overgrown jungle, to cross the bloodstained, Thai guarded border. With great anxiety, throngs of newcomers arrived in ‘the land of freedom.’ Thailand became, for many, a place of asylum and opportunity, and for the Akha people, a rugged group of hunters and once-famed warriors, it became a place to proliferate their heritage unfettered from the oppression of their homelands.

The Akha people were known for being hard line animists, believers in a spiritual world that suffused itself in the land, the trees, the animals, and the forest. Aphi was born into this environment. He understood from a young age that these “evil and good spirits”, were lurking behind rocks, in bamboo shoots, and hidden within certain animals. As subsistence farmers, the Akha believed that virtually everything that touched their lives was at the mercy of the spirits, even life itself! Life for them was consumed with satiating the spirits through annual rituals, ornate ceremonies, building edifices in a certain fashion, consulting the diviners, saying certain incantations, as well as the daily offering up of oblations. They lived close to nature, and utterly simply. Yet, they also lived in agonizing fear of the spiritual realm and its inescapable power.

In this oppressive atmosphere, a fellowship of Christians began meeting nearby. These brave believers were committed to only “One God.” They followed Christ, called on the Father, and trusted in the Almighty Spirit. Word of their gatherings, and their unique beliefs, spread rapidly through the community. Small children, normally left to wander the village or play together, were warmly welcomed to the gatherings. During the lessons, the person and work of Jesus were gently shared. Even as young as he was, Aphi began gaining a deep sense of trust for this Heavenly Man, and by the age of 7, he had come to a sincere and personal faith in Christ!

Within the confines of his old-world village, years passed by like clouds in the sky. Now in his teens, Aphi met and married a local girl. They united their lives together, and split away from their parents, to work and to foster their own family. Those first years, as they recount, were seared by tumult and trial. The only work Aphi could find was, labor-intensive and his wage was exploitive. “My pay was so low, our family felt like we were not going to survive at all,” he declared.

As their family trudged through the murky depths of poverty, he prayed to his Heavenly Father. “I asked God to help my family,” he shared. Thereafter, the atmosphere subtly changed. The royal family of Thailand, known for their benevolence, set their sights on the poverty-stricken tribes of the North. Desiring to better the lives of the tribals, who depended on growing crops for the drug trade, a plan was laid to replace these crops with a profitable alternative. With sincere generosity, Queen Sirikit officiated over the royal project. Its goal was to exterminate the production of opium, and to create self-sufficient families and villages. With these convictions, they commissioned a road crew to carve a large road over a harrowing mountain pass in the ‘Mae Fa Luang’ mountain range. A new village was fashioned in these high, cloud-covered mountains.

Aphi’s family was one of the few chosen for this royal project. They were overjoyed! They were eventually relocated to a fertile plot of land high in the mountains. The soil was raw, and aching to be cultivated. They were provided with a modest dwelling place, starter seeds, various agricultural tools, access to community solar cells, and a small elementary school. Eagerly, they begun to sprout coffee beans provided to them by the government. They were to produce organic, pesticide free, top-grade coffee. Meanwhile, the beautiful cloaks of dignity, purpose, and self-sustainability were wrapped warmly around their lives. God was answering their prayers.

At the start of the project, the family worked hard to clear the plot and plant their coffee. In total, they planted five-thousand plants on their hilly plot. Even though they experimented with different techniques, their coffee yield was minimal, and they yearned to see more for their efforts. At this point, the couple were introduced to members of the FARMS loan committee. They found them to be very understanding and helpful. They applied for a revolving loan, and received $300. With this, they sped off to purchase organic fertilizer. Their yield greatly increased, and the loan was paid off in rapid fashion. Subsequently, they received several larger loans, and used the funds for the same purpose. "It was amazing to watch,” he divulged. “We had so little fruit at the beginning, yet, now, we were getting more than twice the coffee we got before!" Aphi, joyfully continued, saying, "We just got a medium size roasting machine. In the future, we dream of starting our own coffee shop, and eventually, we want to create our own brand!”

As we finished our conversation they remarked, “Our health is very important for our work. Pray for this and pray for our village. We want to see the whole community become Christians. Out of the eleven families here, only four of them have faith." On the creaky, shifting floor of their bamboo and grass hut, we all cried out to God together. Many eyes were filled with gentle tears of joy.

Suntalee and Kitti Safon Suntalee (holding her four year old boy who was born deaf) has been a Christian for some time. Her husband came to know the Lord about seven years ago. They applied for their first loan with FARMS to improve their coffee crop. Their loan was for $430. It is their hope, that they will earn enough from their project to send their little son to a school that teaches sign language. The mother is required to attend and the father is encouraged to attend also. The school is in a large city three hours away. Pray for this young family and for their little boy. Pray that God will bless the work of their hands and give them the desires of their hearts.

Ying and Jiawseng Farm Ying and his wife Jiawseng have had several loans from FARMS. Their present loan is for $1,715. They are using the loan to improve their coffee yield with fertilizer application and irrigation. They also will use part of their loan for their yearly rice crop. This family has been extremely faithf…
Read more

This is Mr. Rondo and his wife who live near Camaguey, Cuba. Although Mr. Rondo was trained as an electrician and as an appliance repairman, he could not find work because he had no tools or a place to work. It took just a small loan of $100 to enable him to buy some tools and to build a small shop behind his home.


When I asked him what the loan meant to him, his wife Helen and their two year daughter Angela, this was his answer. “The loan has been a prayer answered by God as a way to support my family. With my loan I started repairing small appliances in 2015 and because the business grew, I was able to employ my own father who had no job!”


One part of the business that has really grown, is the repair and manufacture of “flashers.” These are like a blinking tail light and by law all vehicles need to have them to operate on the roads at night. There is enough demand for this that Mr. Rondo's father helps him with this part of the business. Mr. Rondo also has expanded his business…
Read more 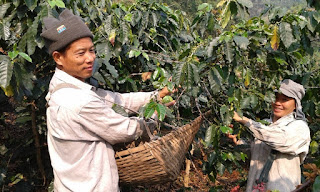 In this post we will highlight two participants of the a FARMS program in Thailand.
Sing and Chantida
Sing and Chantida have two boys and one girl. This is the first time that they have used the FARMS loan program and they have agreed to pay the money back in a years’ time. Their loan was for 60,000 Baht or about $1,715. With their loan they are funding their coffee production, linchee fruit trees, and their yearly rice planting. They needed the loan to plant more trees, to buy adequate fertilizers and other items needed to increase their harvest. The main reason for the expansion of their farm is to provide for their children’s college education. All three of their children are near college age. Normally, higher education is only a dream for tribal families. However, we see this dream come true for project holder’s children over, and over again. Your help makes this possible.