Micro-credit vs the FARMS approach

By Christopher Eby - October 08, 2016
Micro-credit was hailed as a cure-all for poverty. Nevertheless, several recent studies have documented the true picture. Little evidence was found for the illusory claims of reducing poverty. In fact, studies have shown that instead of the poor being released from poverty, secular micro-credit programs have encumbered the poor with layers of debt! This horrendous outcome is not surprising to me. Why? Because the whole scheme was built on the backs of the poor. The poor pay for this help, by supporting those running the programs as well as funding the cost of their credit, enabling the financiers to become richer and richer. This unbiblical approach to poverty, funded by interest rates of 35% and above, is a travesty. One study reported that the poor paid over 21 billion dollars in micro-credit interest in 2012!

But there is good news! FARMS International has a biblical approach to poverty. Local volunteers run our programs, so the cost is very low. Also, we do not charge interest! This fact alone gives the poor a real chance at making a decent profit, thus enabling them to come out of the poverty cycle. Above all, there is a tangible spiritual component missing in the many prominent micro-credit programs. At the very core of our programs is the spiritual concept of giving your way out of poverty. Jesus said, “Give, and it shall be given unto you...” This biblical truth has supernatural outcomes when put into practice by God’s children. Compare this to any secular agency. There is a stark difference. As many of you know, those receiving a FARMS loan agree to tithe from their project profits back into their local church. This is revolutionary thinking! How can giving produce more for the poor? The answer is simple; God blesses the obedient giver in many subtle and even miraculous ways.

FARMS does not use the term “micro-credit” because micro-credit produces “loan clients”. Small loans keep the borrower in perpetual need of the next loan, just to get by. It is very profitable for “micro finance organizations” to have a large clientele needing regular loans. Why would they ever want the poor to be free from the need of additional financing? A recent study found that the average yield of loan portfolios for micro finance institutions averaged 21.5%! “He that oppresseth the poor to increase his riches, and he that giveth to the rich, shall surely come to want.” Proverbs 22:16

Our approach is to give large enough loans to set a family or individual on a path out of poverty. On average our loans have a value similar to the yearly income of an average poor family in the region served. This amount is more than a family can realistically save, and opens tangible opportunities to use their God given talents to prosper. It is possible for a family to reach economic independence. In the next few posts, we will highlight our program in northern Thailand among the Mien hill tribes. Some of these inspiring families had such good success with their first loan that the committee approved additional loans to expand their ventures.

The Rondo Family This is Mr. Rondo and his wife who live near Camaguey, Cuba. Although Mr. Rondo was trained as an electrician and as an appliance repairman, he could not find work because he had no tools or a place to work. It took just a small loan of $100 to enable him to buy some tools and to build a small shop behind his home. Mr. Rondo's shop When I asked him what the loan meant to him, his wife Helen and their two year daughter Angela, this was his answer. “The loan has been a prayer answered by God as a way to support my family. With my loan I started repairing small appliances in 2015 and because the business grew, I was able to employ my own father who had no job!” A flasher that Mr Rondo was working on One part of the business that has really grown, is the repair and manufacture of “flashers.” These are like a blinking tail light and by law all vehicles need to have them to operate on the roads at night. There is enough demand for this that Mr. Rondo&#
Read more 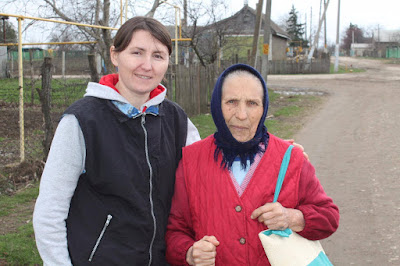 Tamera in her home village Tamara began her life in a small village in southern Moldova. Sadly, like many children there, abuse and neglect destroyed her youth and self-worth. She shared her story with my wife Pat and I while in Moldova last Spring. "My life growing up was very sad. I felt more like an orphan than part of a family. I felt like rubbish! Worthless! I felt like there was no reason to live, I might as well die. My life was aimless. Then one day a girl shared with me a verse from the Bible. She read John 3:16 like this. So God so loved Tamara that he gave his only son that Tamara should not die, but have eternal life. For me to hear that God loved me, was such a surprise, so amazing. Love was something I knew little about. I knew nothing about God, or how to pray or even how to act. Then some time later a friend of mine gave me a Bible and by reading God’s word, I became a Christian in 1996. Because of this, my parents kicked me out of my home, but thankfully a Chr
Read more

Suntalee and Kitti Safon Suntalee (holding her four year old boy who was born deaf) has been a Christian for some time. Her husband came to know the Lord about seven years ago. They applied for their first loan with FARMS to improve their coffee crop. Their loan was for $430. It is their hope, that they will earn enough from their project to send their little son to a school that teaches sign language. The mother is required to attend and the father is encouraged to attend also. The school is in a large city three hours away. Pray for this young family and for their little boy. Pray that God will bless the work of their hands and give them the desires of their hearts. Ying and Jiawseng Farm Ying and his wife Jiawseng have had several loans from FARMS. Their present loan is for $1,715. They are using the loan to improve their coffee yield with fertilizer application and irrigation. They also will use part of their loan for their yearly rice crop. This family has been extremely
Read more